Yes, I do indeed have a new baby, well, not the one you might have been expecting….  Heeheee.  Not my daughter, Tracy’s, who is not due until the end of the month. Since she is having another wonderful son…I just had to tell you about my recent acquisition….a girl!  Yes, I have a sweet baby girl, born on Christmas day, 2011.  My dear friend, Carolyn, who is a fellow glamper, in the Sisters on the Fly, brought this little sweetheart along on our Farm Chicks/Sisters on the Fly weekend, at Riverside State Park, here in Spokane, WA.  (Thanks, Carolyn…she loves the run.) 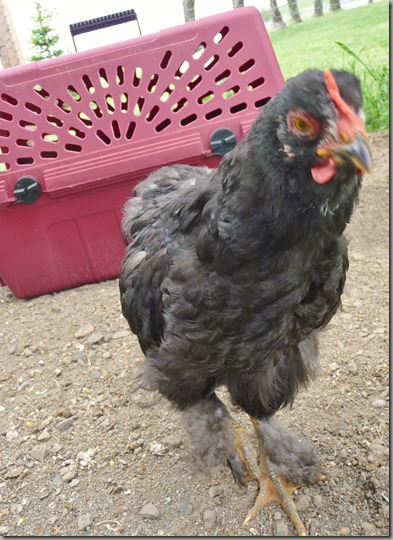 Now I hear what you are saying……is she homely or what?  This little sweetheart is so soft and fluffy and so friendly…I am so lucky to have a replacement for my Rosa…well, no one can replace her…ever.  I mean don’t you just want to mother this little unfortunate? 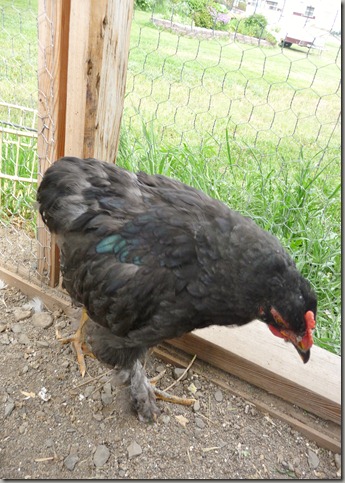 She’s a mixed breed, I see some of Rosa in her, the Black Sex link, but aren’t those leg feathers, something.  And no tail feathers.  I tried introducing her and the girls, Amelia Earhart and Eleanor Roosevelt. They are not in the least happy.  Can you blame them?

This morning, early on I added her to the coop when they were sleeping and I caught Eleanor trying to peck her neck not much later…she even had her cornered.  Bummer.

This afternoon she is out in the run and the others are in the yard, doing a ‘walk about’.  Not sure what to do tomorrow.

But I named her…..can you guess? 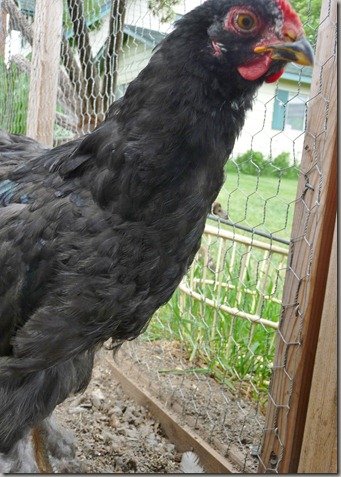