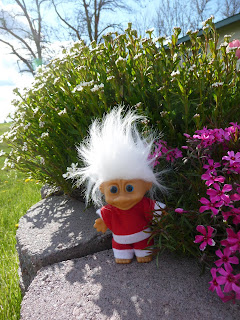 'Cause we had snow yesterday! The biggest 2 inch flakes I have ever seen, about 3/4 inch in all. It was really cold about 36. And then I took these self portraits in the afternoon, when it was about 50. Can you believe it? All in one day. Will I ever get to plant? 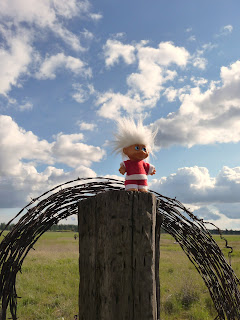 This is my friend, I picked him up at the Salvation Army because he was so cute. I had a little one back in the 60's when they first came out. I looked up the history for you.
"Troll dolls are ugly, shock haired little dolls that originated in Denmark an were popular in the early 60's.
The story goes that a Danish woodcutter named Thomas Dam needed a birthday gift for his daughter one day in the late 50's, lacking the money for such frivolities, he carved a doll out of wood. The doll was made to resemble a troll, one of the ugly subhuman creatures that pop up so often in Scandinavian mythology. Dam's daughter dressed up he new little friend and showed it around to her playmates. It happened to catch the eye of a local toy store owner who like it and asked Dam to make him some to sell. The ugly little doll, which was supposed to bring their owners good luck, gained an enthusiastic following, selling all over the world."